The evidence has been clear for years that distracted driving is a significant cause of accidents on America’s roadways. Nevertheless, recent data suggests that using electronic devices behind the wheel distracts more drivers than ever. It is an alarming trend with which personal injury lawyers are all too familiar.

Distracted Driving Steadily on the Rise

According to data collected by Zendrive, approximately 69 million drivers use a mobile device at least once during daily driving. Zendrive operates a mobile phone app that facilitates connectivity in older cars, and the data collected by the company was taken anonymously from users of this app. According to the data, nearly 60% of all drivers use an electronic device at least once per day while driving. The data also shows that drivers are using their phones for longer periods each day. The average phone use for a driver is 3 minutes and 40 seconds, an increase of 10 seconds compared to last year.

The use of electronic devices isn’t the only thing that has increased in recent years. The number of fatal car accidents was up in 2015 and again in 2016, marking the largest increase in nearly 50 years. According to the National Safety Council, 2017 saw over 40,000 deaths in car accidents.

The increase in traffic fatalities and distracted driving has led to major changes to the laws in many places. Texting while driving has been banned in 47 states, and 15 states plus the District of Columbia have outlawed using hand-held devices altogether while operating a vehicle. 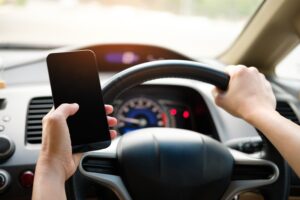 The Consequences of Distracted Driving

Collisions with distracted drivers can be particularly dangerous because they frequently involve a frontal crash. According to the National Highway Traffic Safety Administration, head-on crashes often lead to the most devastating injuries. These collisions can cause:

If you have been harmed in an accident caused by a distracted driver, our New Jersey accident lawyer may be able to help you recover monetary compensation for your injuries. Choosing the right personal injury attorney is important. The knowledge and experience of your legal counsel can directly influence settlement negotiations and trial preparation. You may be entitled to recover damages, including medical bills, lost wages, auto repair bills, and compensation for pain and suffering.

If you or a loved one was injured in a vehicular accident, the seasoned legal team at Rebenack Aronow & Mascolo L.L.P. is prepared to help. Before you decide whether to retain our services, we’d be happy to set up a free consultation. Contact our office in New Brunswick at 732-247-3600 or our office in Somerville at 908-448-2560.